“On Stage is our Home From Home !” 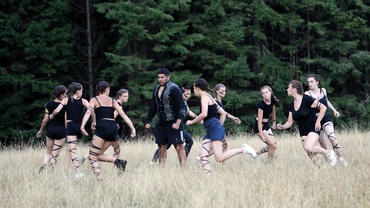 Vellereille, Gold Hill, Norfolk…the four Derveaux sisters have been on no less than twelve Roeland camps between them. They really are fully-fledged members of the Roeland fan club. Rose-Anne Marie (18) en Louiza-Maxine (19) are happy to tell us more about their experiences at camp.

“I loathe French from the bottom of my heart”, says Rose-Anne Marie. And she’s not joking. “But Roeland camps are really fabulous”, she quickly adds, with a laugh.

“You do have language lessons at the French camps”, admits Rose-Anne Marie. “But they are completely different to the lessons you get at school. To start with, everyone sits in a circle or a big U-shape, which makes a huge difference. The lesson groups are small and they include games, lots of chatting and no boring grammar exercises.”

“In contrast to other language camps where you have up to four hours of language lessons each day, there are no language lessons at Gold Hill on Stage”, adds Louiza-Maxine. “But does that mean you don’t learn as much of the
language ? I don’t think so. At the Gold Hill on Stage camp, you work together with the whole group to create a final project, which is a theatre production which you perform for your parents, your friends and theatre-fans from the lovely town of Shaftesbury. Because you all work together in such an intense way, you learn just as much of the target language.”

“Personally, I found that my time at camp really gave me the self-confidence to speak another language”, says Louiza-Maxine. “You realise at camp that it’s really not a big deal if you make a few mistakes. The main thing is that you can communicate and understand each other.”

“At school, it’s always embarrassing when you have to speak another language. You don’t want to make mistakes in front of your classmates and your teacher”, adds Rose-Anne Marie. “But at camp, it really doesn’t matter.”

“Gold Hill on Stage is such an awesome camp !” says Louiza-Maxine. “It really is my home-from-home”, echoes Rose-Anne Marie.

“I was a bit shy about singing and dancing for the first few days, but everyone joins in. It’s basically a two-week-long party”, says Louiza-Maxine. “Plus, it’s in a really beautiful location.”

The sisters are so enthusiastic about Roeland that Louiza-Maxine signed up to do the Roeland youth work course. This is a government-recognised certificate for working as a youth-work leader which also gives training in language-teaching. “The six-day course ‘Taalanimator in het jeugdwerk’ was really tough”, she admits. “But it was definitely worth it. During the training, I really bonded with the other candidate-volunteers and I’m so excited about joining a Roeland camp as a volunteer.”

“Why is the training so tough ? As a participant, you have no idea how much time and effort the volunteers put into their lessons, workshops and activities. When you do the training course and you have to do it yourself, you really appreciate all the hard work they put in.”

Rose-Anne Marie is also hoping to become a Roeland volunteer and has taken part in one of the Roeland training weekends. It was a fascinating experience, she tells us : “There were Dutch and French participants. We had to give each other lessons and explain how to play the games. Because the other group spoke a different mother tongue, we quickly saw how intense a language camp can be.”

“I can’t over-emphasise how much I recommend that you send your child to a Roeland language camp” adds mum, Benedikte. “As well as learning another language, your child will meet new friends and develop their social skills.”

“Make sure you choose an English theatre camp”, say the sisters. “Even if you think that theatre, dance or music aren’t your thing – you’ll surprise yourself with what you can do. Just give it a go !” 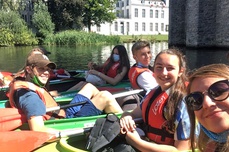 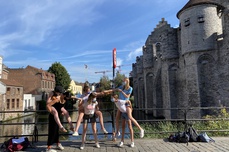 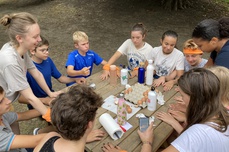 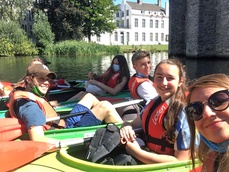 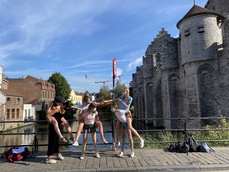 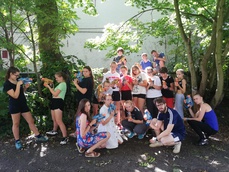 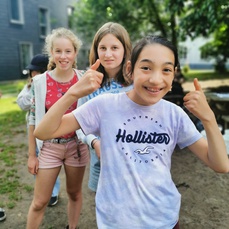 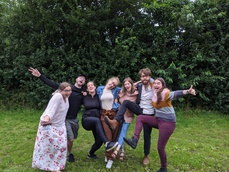 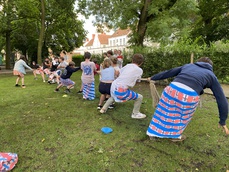