We use cookies on this site to enhance your user experience. By clicking any link on this page you are giving your consent for us to set cookies.
Use functional cookies only Accept all cookies
Volunteers 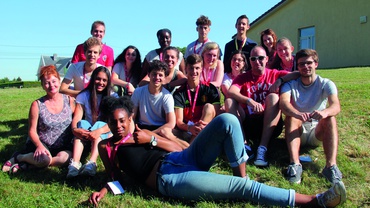 Photo: Charlotte Santens (in the middle, wearing a grey top) with her team in Stenay

“From the moment the children step off the bus, we only speak French”, says Charlotte Santens, a volunteer coach at Roeland with 11 years of experience. “During the first two days, they find it quite tricky to switch to another language. But from the third day onwards they aren’t even thinking in their native language.”

“Of course, we don’t start out with full sentences; at the beginning, we use words, gestures, dances and plays to communicate with each other. And it works! The children join in with the games, carry out the tasks we set them and manage to have simple conversations.

How do you support each child individually?

“We have plenty of volunteers. We split the children and young people into small groups. And we are living together 24 hours a day. It doesn’t take us long to figure out which children want to be left to get on with it and which ones need extra help.”

“Many of the children arrive here knowing nobody. The coaches do all the activities with the children and sit with them at meal times. They are like glue, helping the children to create friendships with each other quickly.”

Don’t you think it’s a bit strict to insist that the children speak a foreign language right from the start?

“Yes, it is. But if a child is really struggling with something and cannot explain what they need to say in French then we make an exception.”

How do children react to being immersed in a foreign language straight away?

“In the beginning they tend to giggle a lot. Some of them pretend not to understand. But a large proportion of the volunteers are French and the others pretend that they don’t speak Dutch, so the kids don’t have much choice but to speak French.”

Would you say that the children learn a lot during camp?

“Yes, especially the kids who arrive with hardly any French. After 12 days, they can hold a short conversation. With the other kids, you see their vocabulary improving enormously. They learn words here that they would never learn in the classroom. We get up to lots of different things together from eating and having lunch to going swimming. And if we play football every day, it’s inevitable that after a few days they will know the French word for goalkeeper!”

“Our language activities are completely different to language classes at school. For example, we might cook pancakes together, which teaches the children vocabulary such as spatula, bowl and oven. Or we might make a living crossword puzzle, with each kid as a different letter. We make sure it’s always fun, which is great for the kids and great for us. Roeland camps are all about having fun – you just happen to do everything in another language.”